Optimizing your scenes for mr proxies

Have you ever said this: "I'm using the new mr Proxy objects in 3ds Max 2009 / 3ds Max Design 2009 and I can't render but a few proxy objects before I run into the dreaded out of memory error....what gives?"

If so, then you'll probably find this blog entry useful.

In 3ds Max 2009 / 3ds Max Design 2009 there's a new BSP method introduced called BSP2. For those wondering, BSP = Binary Space Partitioning and it sub-divides our scenes into boxes (voxels) which allow mental ray to accelerate the ray-tracing process.
(Of course that's an over simplified explanation)

BSP2 - Optimized for large scenes containing more than one million triangles. Requires less memory than BSP and is able to flush memory when necessary. May produce a small performance loss when using BSP2 with smaller / less complex scenes. Adjustments are automatic here, so there are no adjustable parameters needed for tuning.

Now that you're armed with this information it becomes clear that when rendering a complex scene with a lot of mr proxies, you should switch over to BSP2. But, there's another option that you can disable that will also help: Turn off the scanline option.

BTW, if you turn off scanline, that doesn't mean you'll lose the direct illumination in your scene, it just means raytracing will take over that task.

So, why would we want to turn scanline off? Zap has explained that the scanline option speeds up simple scenes, but doesn't really help complex scenes that much. He also mentioned that it creates some memory consumption that isn't flushable. Therefore, turning it off on complex scenes with BSP2 will help free up some extra memory.

Cool eh? Now if anyone is asking at this point "where is all this BSP & scanline stuff you speak of located?"...here's a screen capture: 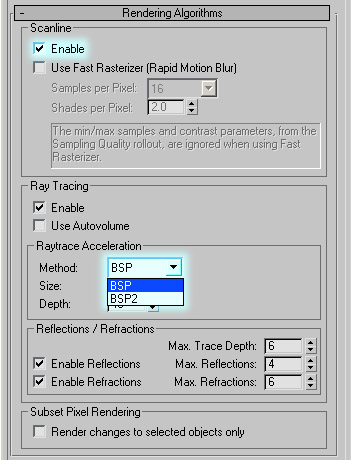