Max matlab scenes, and what to do if your output doesn't look similar to the default render that comes with the scenes.
Current setup:
When you unpack the matlab scenes you'll find a simple document included that explains a bit about the various gamma options. The scenes are currently configured for option B, because I felt that it had the most benefits. This doesn't mean it's the best work flow or the one that you should immediately switch to. It's merely my opinion, nothing more, nothing less! Don't read into it any further than that.

In the gamma document included with the 3ds Max Matlab's, I've even gone the extra step to explain my thought process on this tough decision and the pro's and con's of each method that I weighed out to come to my conclusion. I did this so you could make an informed decision as to which gamma method works best for you.

Overly dark texture:
The most common issue that people will encounter is if you're using a gamma setting of 2.2 for your Bitmap input setting as illustrated in the following screen capture:

If you're using this particular setup then the matlab textures will render overly dark, like this: 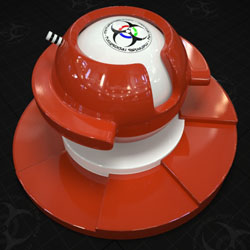 How do you resolve this issue?
It's rather simple actually. Since I'm using a bitmap input gamma of 1.0 I locally control the gamma of my textures by wrapping them inside the gamma/gain utility shader, shown below:

If you're using an input gamma of anything higher than 1.0 then you'll need to adjust the scene a bit to get the correct results. The three areas you need to adjust are the floor grid material, the white sphere material, and the environment.

You'll want to load these three materials into the material editor and then either change the gamma setting on the gamma&gain utility shaders to 1.0, or you could remove the gamma&gain shader all together and just apply the maps as you normally would.

A word of caution: The .hdr we used in this scene has a baked in gamma curve (2.2). So while floating point images such as .hdr/.exr's would normally be loaded into 3ds Max in a linear format (gamma 1.0), you'll need to load this particular .hdr in at gamma 2.2. Although I personally prefer 1.8 for this particular .hdr.

If this doesn't help explain the gamma/texture issues let me know and I'll upload a short video to help clarify these issues.

Thanks for your support! Blog entries may be discussed in the 3DA forums HERE